Over two days in Edinburgh, Write Like a Grrrl and For Books’ Sake championed writing by women and celebrated the women writers we love with a diverse, amazing programme of practical talks, workshops and advice. Over 90 women attended Grrrl Con and a brilliant, inspiring time was had by all. 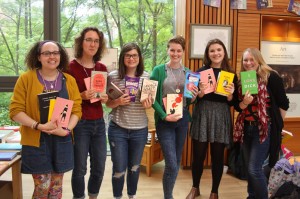 Aimed at emerging women writers of all levels, Grrrl Con provided over 90 attendees with the opportunity to connect and collaborate with a nationwide community, while delivering all the essential tools, insight and inspiration to revolutionise writing craft and confidence.

Each day featured talks from the UK’s most innovative and original women writers, along with a range of workshops, with attendees able to tailor their individual itineraries to best suit their own personal writing aims and ambitions.

Jackie Kay: Renowned for her humour, warmth and talent, Jackie Kay, MBE, has been awarded numerous prizes for her creative works, including the Somerset Maugham Award for her poetry collection Other Lovers (1994), the Guardian Fiction Prize for her debut novel, Trumpet (1998), and the British Book Awards Writer of the Year (2007). She writes poetry, fiction and drama, and her most recent books include poetry collections Fiere and Reality, and her memoir, Red Dust Road.

Jenny Brown: Founder of Jenny Brown Associates, one of the UK’s leading literary agencies, Jenny was previously Head of Literature at the Scottish Arts Council, presenter of book programmes for Scottish Television, and founder Director of the Edinburgh International Book Festival (of which she is now a Board member). She is also a former Committee member of the Association of Authors’ Agents and was shortlisted in 2014 for the Agent of the Year Award. She is Chair of the Bloody Scotland crime writing festival.

Denise Mina: Dame Denise Mina is a critically acclaimed Glaswegian crime writer. Her novels include The End of the Wasp Season and Gods and Beasts, both of which won the prestigious Theakstons Old Peculiar Crime Novel of the Year Award in consecutive years. Denise also writes short stories and plays, and is the author of the Garnethill trilogy. She was inducted into thr Crime Writers’ Association Hall of Fame in 2014.

Amina Shah: A passionate advocate for literacy and books, Amina is the Scottish Book Trust’s Director of Programme. She has worked with Heads of Public Libraries, COSLA, The Scottish Government, Creative Scotland, Carnegie UK Trust and Scottish Book Trust on developing the first National Strategy for Public Libraries in Scotland, and will be delivering a talk on finding the motivation to keep writing.

Leone Ross: A novelist, short story writer, editor and lecturer in fiction writing. Leone was born in England and grew up in Jamaica. Her first novel, All The Blood Is Red was published by Angela Royal Publishing in 1996 and translated into French. The novel was long listed for the Orange Prize in 1997. Her second critically acclaimed novel, Orange Laughter was published in the UK by Anchor Press, in the USA by Farrar, Straus & Giroux and Picador USA and in France by Actes Sud.  Her third novel, This One Sky Day, and her short story collection, Come Let Us Sing Anyway, will be published in 2016.

Kirsty Logan:  Professional daydreamer Kirsty is the author of short story collection The Rental Heart and Other Fairytales (Salt, 2014), which was recently awarded the Polari First Book Prize, and debut novel The Gracekeepers (Harvill Secker, 2015). Her latest book, A Portable Shelter (ASLS, 2015), is a collection of stories inspired by Scottish folktales.

Lucy Ribchester: Fiction and dance writer Lucy’s debut novel The Hourglass Factory was published earlier this year. In 2013, she received a Scottish Book Trust New Writers Award for the opening chapters of the book, while her story The Glassblower’s Daughter was a finalist for the 2014 Costa Short Story Award.

Helen Sedgwick: Writer and literary editor Helen’s debut novel, The Comet Seekers, will be published in 2016 by Harvill Secker in the UK and HarperCollins in the US and Canada. She’s been writing since 2007, won a Scottish Book Trust New Writers Award in 2012 and her writing has been published internationally and broadcast on BBC Radio 4.

Khadijah Ibrahiim:  Born in Leeds of Jamaican parentage, Khadijah is a published poet, live artist, theatre maker, producer and the Artistic Director of Leeds Young Authors. Hailed as one of Yorkshire’s most prolific poets by BBC Radio, she has appeared on many international stages. Her poetry collection Another Crossing was published by Peepal Tree Press in 2014.

Marjorie Lotfi Gill:  Poet in Residence at Jupiter Artland, Marjorie is co-founder of The Belonging Project, reflecting on the flight, journey and assimilation of refugees, and Open Book, a charity running shared reading and writing groups for adults in the community. Marjorie’s poems have been published in a variety of journals and anthologies in the UK and US, and have been performed on BBC Radio 4.

“Before Grrrl Con I thought I’d never have a book but now apparently I’ve got two to finish. It showed me the ability I have, and how not to shy away from it!”

“I’ve gained confidence, new techniques and ways to improve my writing, a list of women
writers I want to read, and a fantastic community. An amazingly useful weekend that has
motivated and inspired.”

“You’ve given me self­-belief. For someone with none, that’s an unforgettable feeling. Thank you.”

“I’ve learnt to trust my instincts and gained confidence, as well as a clear idea for a novel

“I feel so inspired, so supported and so lucky to be in this nurturing environment. Grrrl Con has provided a community for me ­ it is truly my home and where I feel that I belong.”

“Realistic but encouraging ­ made everything feel more reachable. Each session had knowledge, encouragement and inspiration ­ the weekend has done so much for my
confidence and motivation, and makes my pursuits feel legitimate and feasible.”

Kerry Ryan has a PhD in creative writing and has tutored writing workshops at the Feminist Library, Glasgow Women’s Library and with women leaving sex work at Routes Out. Her writing has featured in a range of publications including The Kenyon Review, 3:am magazine, Alternative and Indigo Rising. Her story, The Bird, won first prize in Spilling Ink’s short story competition. She is currently writing a novel set in London in 1914, The Art of Mimicry, which was recently shortlisted in Myriad Editions Writer’s Retreat Competition. View more posts